How Hotjar built a 100% distributed company

Nearly everyone I know would love this kind of life. But as much as it sounds exciting and easy, it comes with major challenges. From my own experience, bad internet connection which makes you repeat yourself endlessly is just the beginning.

I wanted to know how 100% remote working companies handle these challenges. After doing some research, Hotjar kept coming up as an example. A few emails later, I was very excited that Ken, their VP of Operations, agreed to have a chat about how Hotjar mastered remote work.

“Somebody Needed to Make Money” 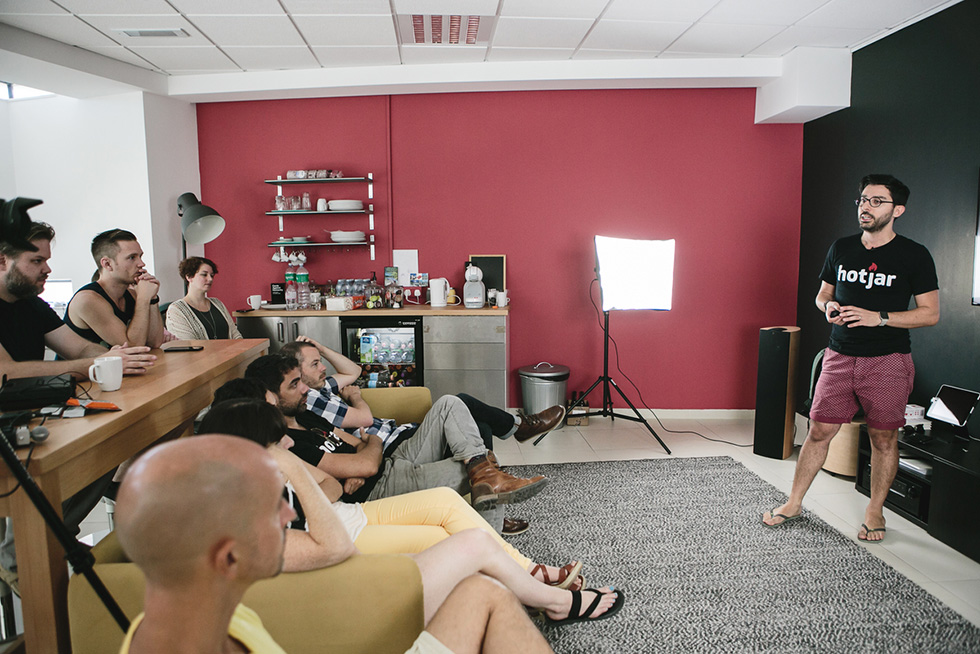 Ken’s first week at Hotjar on a company retreat in Malta.

At the interview, Ken was working from a standing desk at a Greenpoint Coworking in Cape Town, South Africa. (And the internet connection was exceptional!) When asked how he started at Hotjar, he explained that 3 years ago he and his wife decided to change their lives and become nomadic. At that time, Ken was in a corporate world which he loved, but despite that, he took a year off and travelled from the US to Central America with the whole family. After a year they realized they loved it, but “somebody needed to make money”.

Then, he saw an ad for a gig at Hotjar. It was a phenomenal match of his background, culture, and passions. When I asked about his first day, he started laughing and explained it was actually a retreat in Malta. He had just accepted the job a week prior while living in Belize. They flew him to Malta to meet his colleagues who he’d never even seen in person.

Ever since, Ken’s been leading the operations team, thinking of ways to improve Hotjar’s company culture, internal processes, HR and, as he giggled, “ anything that David, our CEO, doesn’t want to do.”

We then moved on to things that make Hotjar a successful remote company.

“Your work speaks for itself.” 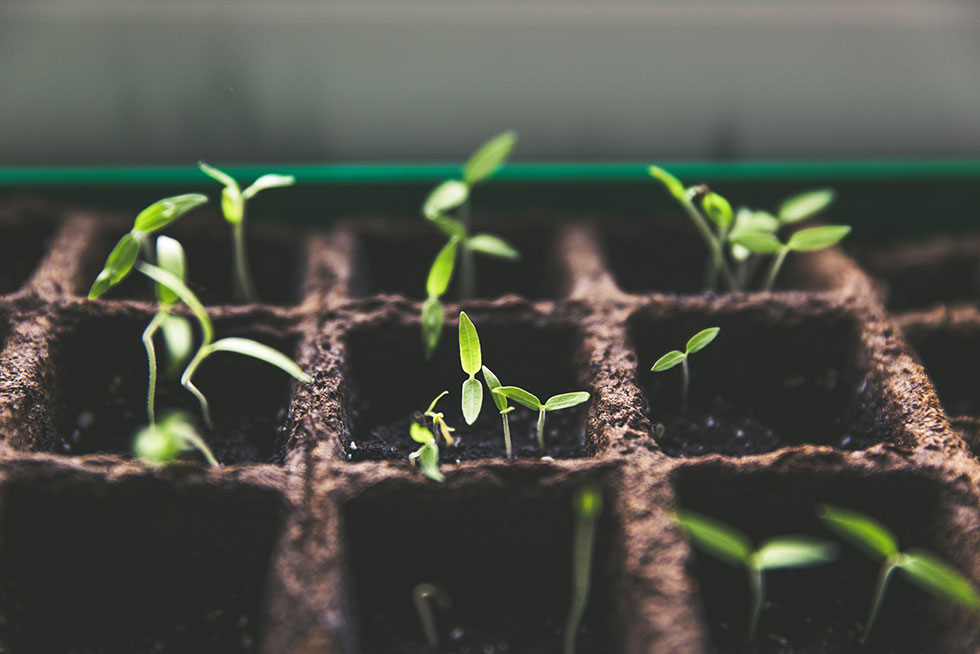 Since its launch in 2014, the company has grown to €10 million Annual Recurring Revenue (ARR) in 2017. Their team has grown from the five co-founders to over 40.  Asked what makes Hotjar a successful remote company, he said: “One of the things that is so key and pivotal to make a remote company work is transparency.”

Hotjar’s team members know far more about their company than a typical employee, including 100% of the financials and company performance data. Put simply, “There’s no hiding.” That transparency also extends to all online communication. “Whether it’s Hipchat, email, or Basecamp. Personalities and the way people work show through these tools. As a remote company, we understand that sitting behind a desk in an office together doesn’t mean you do a better job. Your work speaks for itself.” This transparency builds extraordinary trust and collaboration.

In his study, Professor Noam Wasserman looked at 6,500 failed businesses, 65% of which failed as a result of co-founder conflict or a bad company culture. You could count Hotjar as true believers. They’ve built their success on strong, well-defined company values. 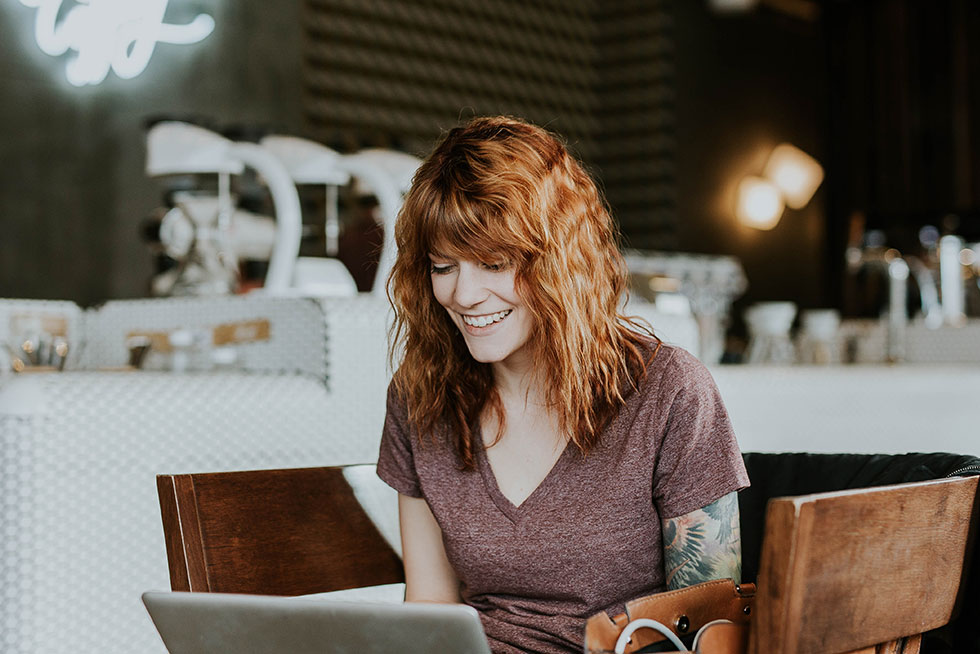 Being a remote company, everything needs to be well established and thought through for Hotjar, especially the hiring process. As VP of Operations, Ken makes sure everything is well organized and grounded in their values. At different stages of the hiring process, they test those values in each candidate. For example, one of their values is giving and taking feedback. So, they embed tasks and evaluations into their hiring process to learn how each candidate responds to and gives feedback.

Giving tasks as a part of hiring isn’t that unique (we do it too), so I wanted to know how Hotjar approaches this in their own way. Ken put it simply: “We pay individuals to complete a task that simulates their role but also provides value to us. And we can turn around and implement even if they aren’t the right person.”

Most interesting for me was the “team involvement” aspect of Hotjar’s hiring. Many of their hires have never worked remotely, so they often ask: “How do you work and communicate? Don’t you get bored when you’re working from home, not an office?” That’s why Hotjar simulates remote working for them before they get hired.

It helps candidates understand whether or not remote feels right for them. “It also gives us the opposite – a chance to see how they work in such environment. Are they quick to pick up the tools that we use, the jargon? It also exposes them to our team members and likewise, our team members get to interact with people who are checking us out.”

An onboarding process that rocks 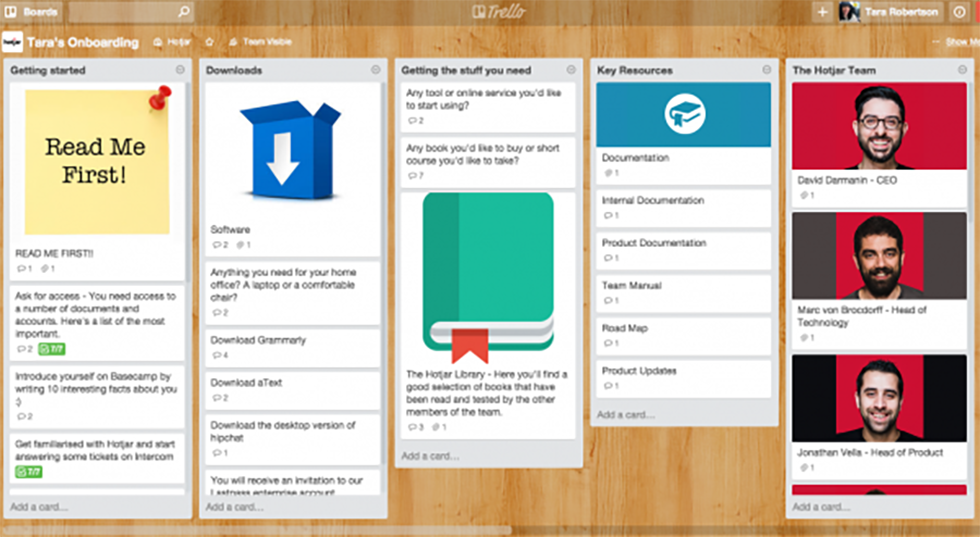 Hotjar’s Trello board for an onboarding process.

If Hotjar hires you, the onboarding process starts before your first day. “The first thing that occurs is the team member from our operations team reaches out and introduces themselves. Together, they define what kind of office set-up or computer the individual needs. Hotjar provides an office allowance to purchase the tools that are necessary for the team members without any restrictions.”  Then all their accounts are set up and everything’s shipped to the new team member.

“In addition to their new computer, we also send a welcome packet. It includes stuff such as t-shirts, stickers, Kindle, Fitbit, as well as a couple of books that are critical to some of our values.”

One of the books is Strengths 2.0, which each new hire reads within the first week, completing a survey to define their top strengths, and putting them into a spreadsheet. This helps their remote team to get to know each other better.

“Just because you see somebody, it doesn’t mean you understand their personality type. This is a way to know more about others than you’d traditionally know when you meet them for the first time.”

On their first day, new hires are welcomed with a self-service Trello board that gives them a series of tasks to get set up. “This includes reaching out to certain team members to schedule onboarding calls, joining demo and training meetings, and introducing themselves by sharing 10 fun facts about yourself” Ken added.

If you want to be a successful remote company… 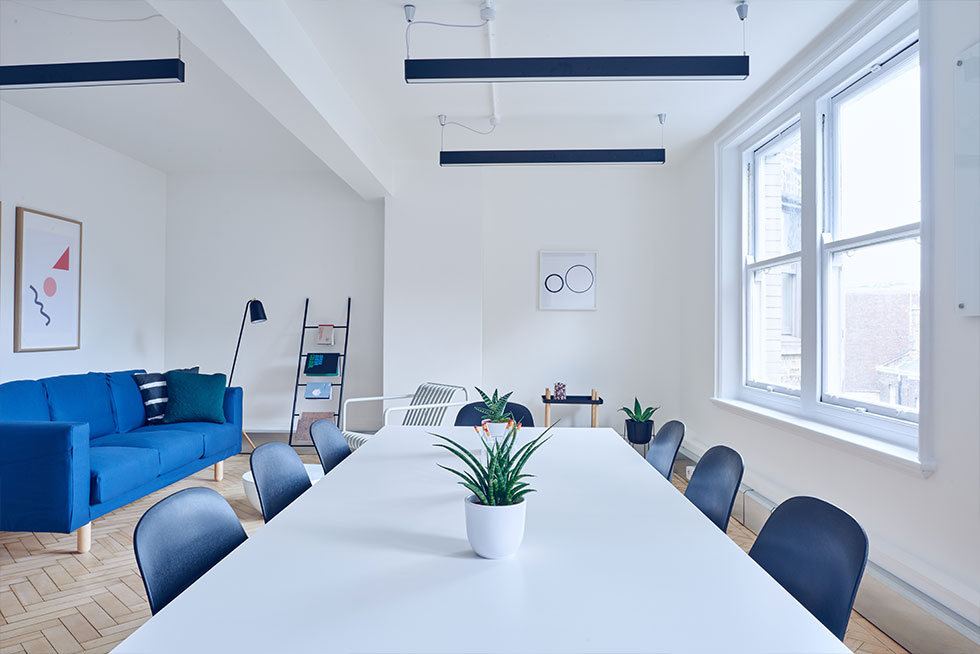 “Make everybody 100% remote.” This was a surprising statement, something we hadn’t considered at Enhancv. We let employees work remotely whenever they like. Also, we have a Dublin office now, with two members (the rest of us are in Sofia).

Ken continued, “if half of your company works in an office and sees each other every day, and the other half doesn’t, this other half will clearly miss the interactions that the others are having physically every single day. Because of that, it kind of creates 2 different company cultures, that are physical and those that are virtual.”

Hotjar has an official office in Malta where its founders are from, but they only use it for retreats and as a mailing address. Their diverse team lives around the Americas, Europe, and Asia, enjoying a huge variety of lifestyles.

“We tell our potential hires – if you join Hotjar, be prepared… 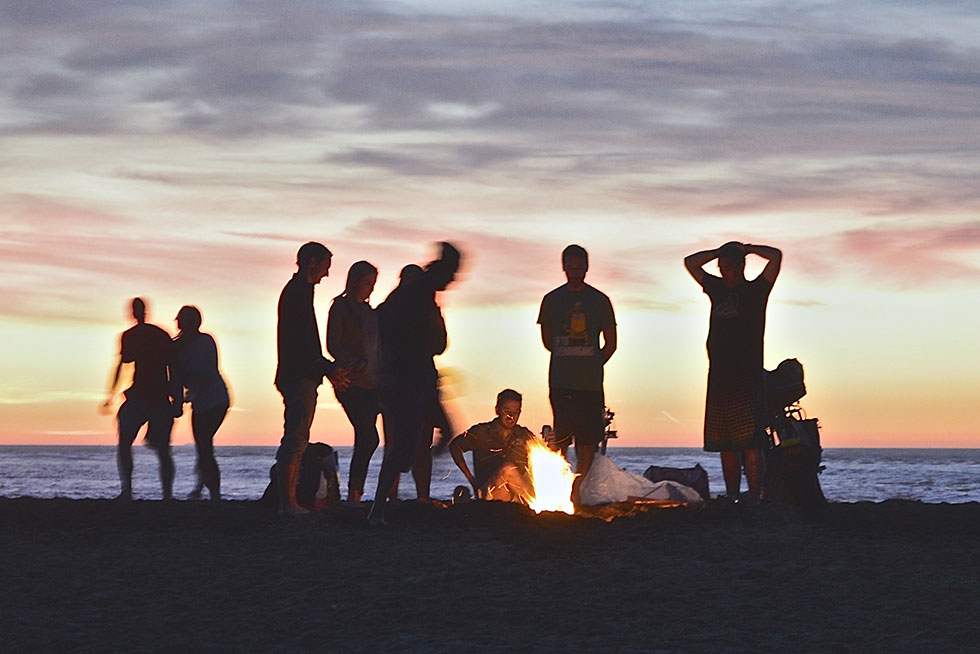 to travel 3-4 times a year.” As a person who loves travelling, this would be music to my ears! Hotjar’s team travels twice a year to all company meetups, which are usually a week long. They always choose a fun place with fun activities. The last two meetups were in Park City, Utah for a winter meetup and Marbella, Spain for a summer meetup. This brought back memories from our last retreat in Venice. Creating great memories for the team is something both Hotjar and us at Enhancv are passionate about.

Hotjar also organizes smaller meetups for their teams. “Our DEV team would meet for hackathons, which are 3 days of heads down, cranking on critical stuff or new ideas. The operations team calls it a ‘docuthon’, which means we work strictly on documentation.”

“Sometimes you can feel a bit isolated” 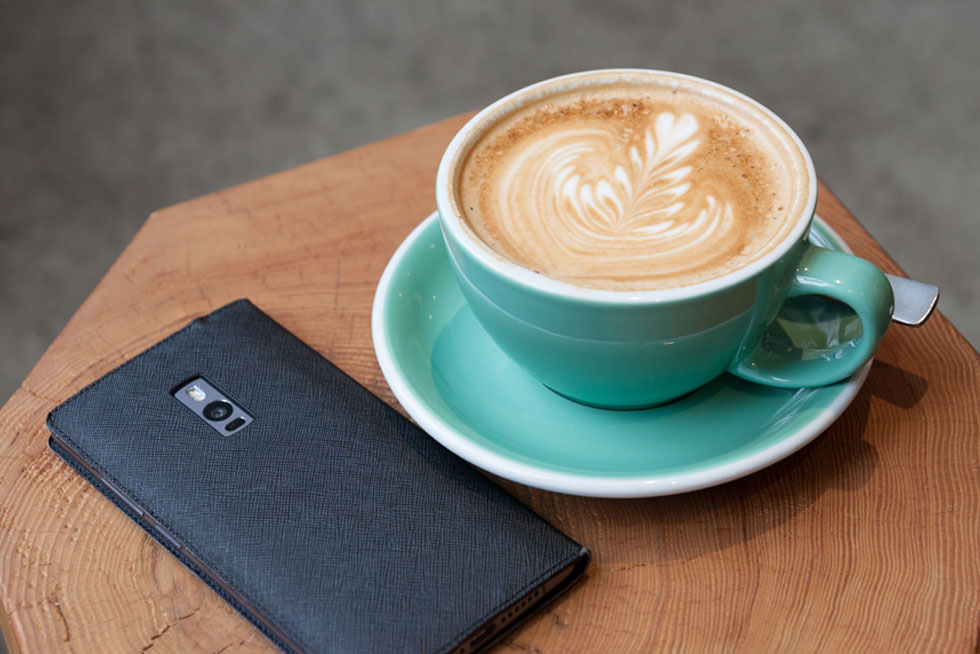 “Even though I love it so much, I do miss the ability to say: “Hey, let’s go grab a beer after work”, or “let’s get our kids together”. That doesn’t exist unless you happen to live in the same town, which is pretty rare.”

Just as it is with our CSO who’s alone in Dublin, Ken mentioned that sometimes you can feel a bit isolated. As a VP of operations, he tries to tackle such situations by coming up with different ideas. “A new thing that we tried is encouraging team members to write in a chat: Hey, in 15 minutes I’m gonna have a coffee break. If you’d like to join me, come to this google hangout and get your coffee ready. The last time 10 people showed up. It’s important to always try new things and scratch the itch,” he added.

Ultimately, however, it’s all been worth it for Hotjar. They would be the first ones to tell you that being a 100% distributed company isn’t for everyone. It takes incredible dedication. But the results have spoken for themselves. Today, Ken wouldn’t work any other way. 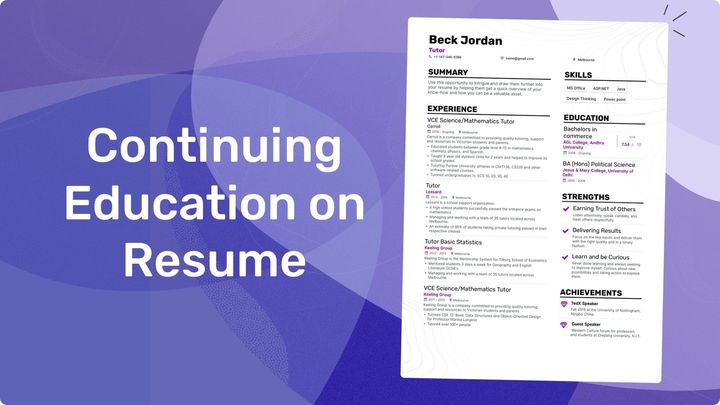 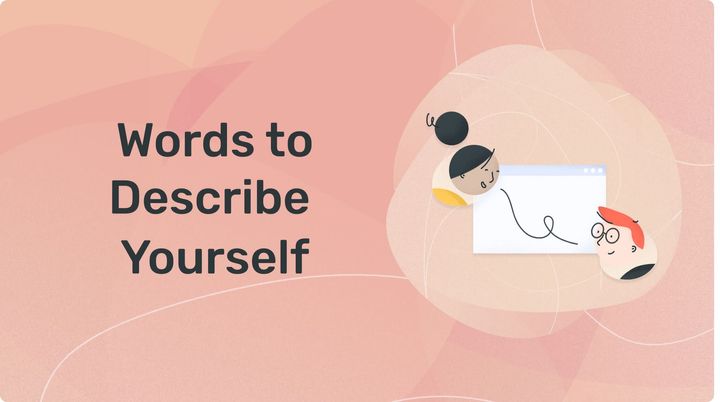 The Best Words to Describe Yourself on a Resume 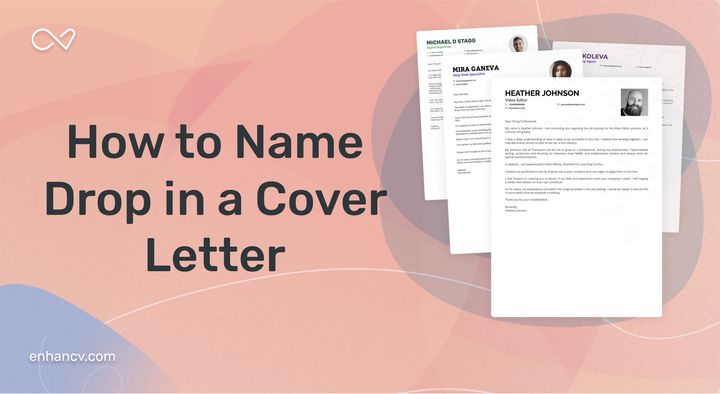 How to Name Drop in a Cover Letter 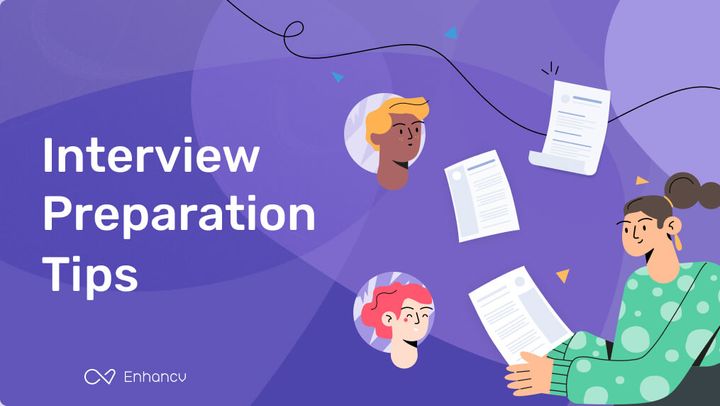 Here's What You Need To Know Before Your Next Job Interview 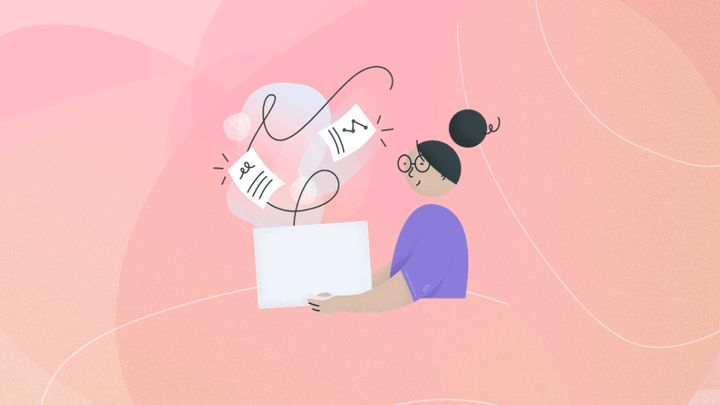 What to Write Instead of "To Whom It May Concern"